Elizabeth Payne and Julie Oliver (photos), Ottawa Citizen http://ottawacitizen.com/news/local-news/ottawas-urban-inuit-renaissance April 17, 2015 “There is a growing sense of cultural pride, especially among children who are steeped in Inuit culture in a variety of programs that are unique to the city. At Ontario’s only Inuit kindergarten, operated at the Ottawa Inuit Children’s Centre in Vanier in […]


Story and Photo by Lisa Gregoire, Nunatsiaq News July 24, 2015 Made-for-Inuit summer camp brings the North to the city “They are together, sharing the same issues, the same struggles.”–Dion Metcalfe “Metcalfe is a Bridging the Gap youth worker with the Ottawa Inuit Children’s Centre — he’s at the school today helping to deliver cultural […]


Story and Photo by Lisa Gregoire, Nunatsiaq News July 27, 2015 Carving studio a gathering place for Ottawa Inuit youth “For these guys, it gives them a skill.”–Dion Metcalfe “Located at the Ottawa Inuit Children’s Centre’s youth facility on Queen Mary St., the carving shop occupies an air-conditioned back room which is decked out with […] 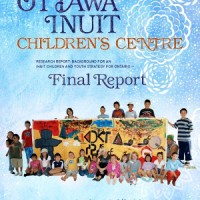 
The OICC Attends the TRC Event at Rideau Hall On a beautiful sunny day, the children and youth of the OICC accompanied Ina and many other Aboriginal dignitaries to the Truth and Reconciliation Closing Event held at Rideau Hall on June 3, 2015. The Governor General Johnson, his wife Sharon, and Chief Justice Murray Sinclair […]

©2016 by The Ottawa Inuit Children's Centre | All Rights Reserved.